Startups, authors, and musicians make scalable products. Now they all have the greatest distribution enabler for information products: the internet.

But here is the thing, is this as good as it sounds?

Why do we adore great authors like J.K. Rowling (The author of Harry Potter)? It is hard to be a successful author. There is a new book being published every 30 seconds, with more than 32 million books available around the globe. The book industry is an extremely competitive space. The most famous books will be sold in the quantity of millions of copies. While the rest will only be sold in the number of hundreds or thousands.

Books are scalable and duplicable. It is written once and can be read by 1 person or 1 million people. A book is an information product. Its distribution used to be in the form of a physical book using offline channels only (bookstores), but e-books have been distributed around the world with the matter of seconds via the internet.

Great musicians like The Beatles, made great music and songs. Music is also an information product. Its distribution used to be in the form of CDs, distributed in music stores. Currently, CDs are obsolete. We listen to songs through online channels like Spotify, YouTube, iTunes, etc.

The reason I used “internet startups” in this post’s title is because the internet has been the greatest distribution enabler for information products. Startups create information technologies / products.

Too many people have made jargons and terms that confuse everyone about the core value of startups. Tech startups scale because their distribution model can scale. Their business operation and products are designed to be able to scale!

Let’s look at Microsoft, it was once a small startup. It grew exponentially with a scalable distribution model and a duplicable product (software). 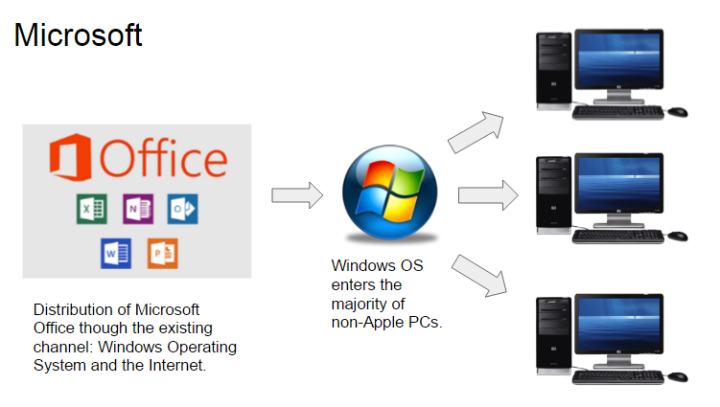 Microsoft has successfully dominated the world through its OS, as long as Microsoft controls the majority of OS market, it will be able to distribute its products easily for the long run.

What could go wrong?

The competition is extreme. It is very hard to be the successful one, but the reward is larger than ever. Facebook dominates the world of social media, it is very hard for anyone to compete with them. Just some simple quotes to have a little bit of the big picture.

The larger the rewards, the smaller the odds of success.

Nine out of ten startups will fail. This is a hard and bleak truth, but one that you’d do well to meditate on. Entrepreneurs may even want to write theirfailure post-mortem before they launch their business. – Forbes

The information above might be inaccurate, but it is not entirely wrong. There are a lot of failures behind every successful Facebook, J.K. Rowling, and Justin Bieber.

The same reason the reward is so huge and the competition is very fierce: Information products are competing for attention and focus.

It is hard to compete for attention, but if you win, you win big. You generally will lose, 90% of the time.

Also, read my post: How to be a useful and necessary startup: Generate and organize useful information